Out of our two concepts last week, we have chosen to proceed with Flower Power. This design was intended to increase interest in power-saving, by making the side effects readily apparent. As more power is consumed, a flower in a pot near the plug begins to wilt, while an LED placed in its centre loses its brightness. If the participant reduces their power consumption, the flower will recover, encouraging minimal power usage. Regardless of the outcome, the user will become aware of how much power they use, making them think about it a little bit more.

The design process for this prototype was fairly straightforward. We met on Tuesday this week and went over our concept, breaking it up into smaller problems that needed solving. We then assigned each problem to one group member, who began researching it overnight. By Wednesday all research showed that the designs were feasible, and arrangements were made to get supplies. Friday was dedicated to detailed analysis of our prototype, including the creation of full wiring diagrams and the creation of a computer generated prototype.

Our current plan for the project is one of iterative development. The team gets together and to figure out what we want to do, and how to go about it. After the meeting, tasks will be assigned to each teammate, who will bring their work to our 3rd meeting. At that time, we will try to assemble all developed resources together, and observe the results. Any failures will be noted, and brought to the next meeting, where we begin the next cycle.

At present our prototype takes the form of two components: A plug and a flower pot. 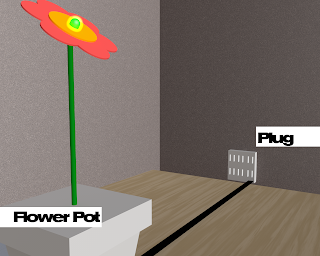 The plug takes the form of a power socket expansion, offering (at present) 6 electrical outlets for the participant to plug their devices into. It also has several bundled wires running from it to the pot.

Inside the expansion are 3 electrical devices: a DC power supply, an AC down-converter, and a Current Transformer Sensor (CT Sensor). 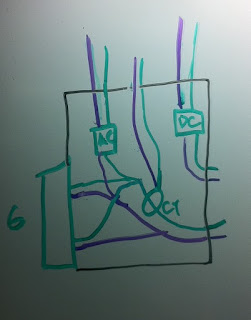 The AC down-converter will be used to convert the 120V wall power to a more manageable 9V, allowing us to detect the voltage of the line without frying the Arduino board. It too connects to the pot.

The CT Sensor will allow us to measure the current in the line. It too sends wires to the pot.

The pot on the other hand houses the Arduino board and all of our analysis circuitry. A diagram is visible below. 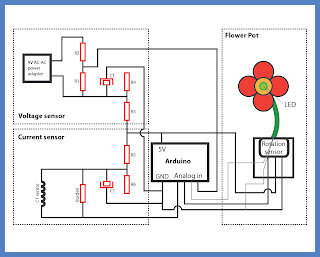 The CT Sensor and AC down-converter connect to the Arduino board through a complicated circuit, designed to remove the AC nature of the power, and allow us to detect both current and voltage. These values are read by the Arduino board, which then uses them to find the power consumed. Using additional pins, the board responds by changing the position of the flower and the brightness of the LED.

Our current method for controlling the flower’s angle involves the use of flexible plastic piping and a piece of thread. This thread is attached to a motor or servo, which will pull the flower down into a curve. Analysis of both methods had begun, but was not finished by the time this report was submitted.

Most of this information is irrelevant to the end user though, who we expect will use the plug as you would any power bar. The use of an expansion in the plug base encourages heavy power usage, while the flower could be placed nearby to act as decoration. By moving the flower off the plug, we hope to make it less likely that participants will hide the flower by putting the plug under a desk.
Posted by Anonymous at 11:59 PM