Wasted electricity has become a social issue in recent years. With growing awareness of “dirty” energy (such as coal) many green interests have expressed an interest in reducing our power usage. Hydro companies have jumped on this as a chance to charge people for every kW they consume. Which has, in turn, led to a rise of energy metres.

However, these energy metres were made with the Hydro companies in mind, not the home owner. Such readouts only show a number - a poor indicator of the side effects power saving grants. We wish to make a power metre that will show this relationship more directly. Our proposal is called Flower Power. 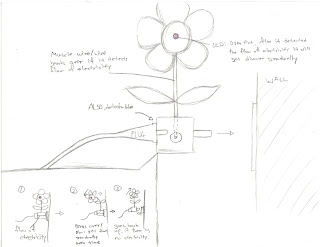 Flower Power takes the form of a block that plugs into the wall. On top of the plug is a flower, which glows when plugged in. The block itself offers a power socket, allowing another device to be attached. 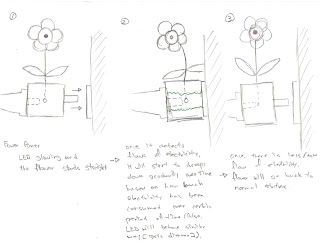 The flower is an indicator of power consumption. If the attached device exceeds a predetermined power amount over a given time, then the flower begins to “wilt”. It grows more limp and the light loses some of its brightness. Extended time will cause the flower to lose more of its life, until it hangs completely limp and the light turns out. This indicates that the flower has lost its “life” to keep the device working.
If the device stops drawing power, then the flower will begin to regenerate. It will slowly stand up and begin to glow again. This indicates that the flower can recover if you give it time.

Exact measurements will be conducted with an Arduino board attached to a CT sensor. This setup is inspired from the project found here. The Arduino board will draw power from one plug while the other is forwarded to the user for the appliance. The board will respond to the power drawn by controlling the flower’s limpness and brightness. The brightness will be handled by one or more LED’s in the centre of the flower itself. The limpness will either be controlled by muscle wire or a motor and string run along a stem made of chain.
Posted by Anonymous at 11:30 PM