Since the last report on our flower prototype, several issues have come to light. These issues have prompted a review of our design, leading to changes (in some cases) or clarifications (in others).

We have chosen a flower to represent power consumption because of the ideals it represents. Flowers are delicate and easily damaged - it is therefore more believable that a flower would wilt from power drain than a small tree. Animals were also discarded, as such shapes encourage play with the object and may lead to it being broken. The flower itself was chosen because it is commonly linked with nature and green ideals. We wished to make users see how they are killing those ideals by wasting power.

Looking over the flower's behavior we have to agree with Carman's comment - both the LED and the droop feature are performing the same function. We thus sought to find a use for both (or failing that discard one in favor of the other). In the end we realized there was no indicator of your current power use. You can see that you have used too much power over the last hour, but not if you are draining the flower now. We have thus changed the function of the LED light to show users their current power drain. The more power the user is consuming at the moment, the dimmer the LED will grow. The LED's dimness will be divided into 6 tiers of power consumption - the higher the tier, the quicker the flower will wilt over time. The use of 6 tiers allows users to see immediate feedback if they reduce their power use, while still preserving the use over time intent of our design.

During this week we have recieved all the power sensors needed to detect power consumption. Upon reviewing these devices we quickly realized that our plug would be far too large. In response to this we have changed the design of the flower pot as follows: 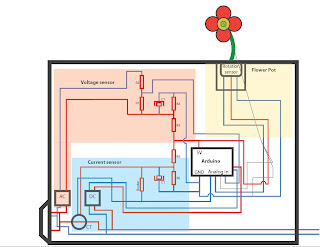 Now all electrical components are inside the flower pot, and the power expansions are a part of the pot itself. This effectively makes the power drain metaphor more direct, while solving our sizing issues. The two cables running to the right will go to a simple plug that will go into the wall.

This change in design means that our device will likely be used in a desk environment, such as a computer workstation. Knowing this will allow us to set the power drain rates for our flower more easily
Posted by Anonymous at 11:59 PM