As previously stated, Flower Power is a smart appliance designed to draw attention to power consumption through the symbol of a flower. The installation is a flower pot with multiple plugs on the front. These plugs encourage power use, suiting the flower to an office space - where it can act as decoration and utility. However, this behaviour will be directly punished. The flower is lit by an LED light, which indicates your current power consumption. Adding more devices to the light reduces the luminosity, indicating the flower is drawing less life from the power line. If power usage continues, the flower will begin to wilt - the rate determined by the dimness of the LED. The rate of the wilting will be slow - about 1 - 5 degrees per minute. The intent is that it is hard to completely kill the flower, and just as hard to restore it. The flower will recover at a lower rate.

The device makes use of ambiguous context, by pitting two objectives against each other - utility and the fate of the flower. While the user may want to use more and more devices, the flower will show them its effects on the environment, discouraging this use. It also makes use of ambiguous information - giving no concrete power values that the user can use for comparison. It is our hope that by abstracting the numbers into a visual indicator they will become more aware of the scope of their power use.

In this prototype we have completely redesigned the flower wilt mechanism. In previous iterations we cited muscle wire and string pulleys as mechanisms. However these proved to be impractical or impossible, based off of the technical knowledge of the group and our shopping prowess. We have therefore changed the mechanism to a rotational one involving a servo motor. This idea will be explored in detail below, when we go over how the design works.

We also reworked our pot - incorporating a rock bed where the stem meets it. This bed of stones disguises the opening, making the flower feel more "alive". The stones were chosen for their low frictional value, so they would not hinder the servo.

The design is intended to be used as a table or desktop power bar. People plug in their devices and use them at will. The flower itself will discourage use, putting itself at odds with the utilitarian design.

Care was taken with the exterior and interior of the prototype due to several reasons. Our care on the inside was due to the very real danger of electrical fires. To mitigate this, we have lined the pot with fireproof & shockproof electrical tape, and securely soldered each join in place. We then covered each join individually in the same tape. On the outside, care was taken because of the nature of the device. If it looks poorly constructed it was unlikely that users would be willing to plug their devices into it.

Without further ado, let us introduce you to the prototype: 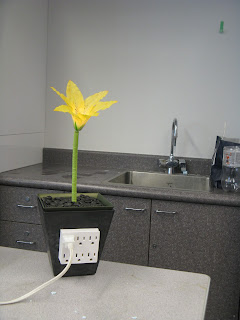 Six plugs line the front of the pot, with the flower placed at the top. 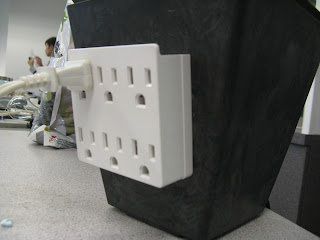 A 6 foot extension cord runs out the back and plugs into the wall. 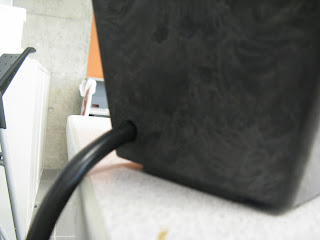 The power for these plugs (and our internal power line) is provided by the "trunk" circuit shown below. 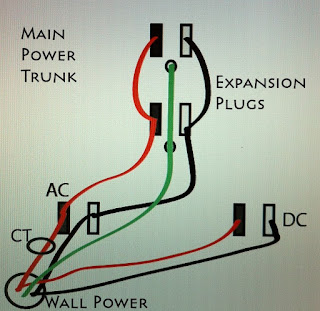 The wall power is our 6 foot cord. Upon entering the pot it branches two ways. One goes to a DC power supply which keeps our Arduino board running. The other line continues on, with the hot wire passing through a current transformer used in the current sensing circuit. The circuit then forks, with one half going to an AC step-down transformer (used to detect voltage), and the other to the sockets which the user will plug devices into. This design has been implemented as seen below. Once the trunk was established, we began sensing current and voltage. These will be covered separately for simplicity's sake. 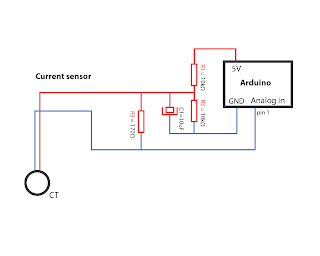 From the 5V connector of the Arduino we have 2 resistors and a capacitor. This configuration has the net effect of adding +2.5V to the voltage sensed by the CT. This prevents the power from flowing out of the Arduino Analog In pin, causing the board to be damaged. The CT is paired with a 170 ohm "burden" resistor. The resistor prevents surges from the ct sensor (caused when devices are turned off) and helps to translate the current sensed by the CT into a voltage that the Arduino can read. The burden resistor has been specifically selected for our CT by us, so as to provide the maximum power range to the board with the minimum risk of surges.

The voltage circuit can be seen below: 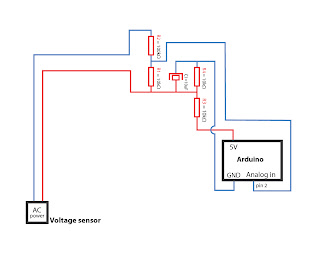 This circuit has a similar setup on the 5V pin, and it provides the same function - it adds 2.5V to the power given by the AC transformer. The other two resistors step down the voltage from an alarming 7V (from the Arduino board's point of view) to a more respectable range of about 4-5 volts.

These two circuits are added to the pot below. 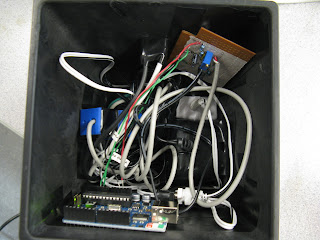 The Arduino board then calculates the power, and uses it to divide the usage in to 6 "tiers". The LED brightness and flower tilt are then adjusted based off of what tier you are in, and if you remain there. The circuit for this is seen below. 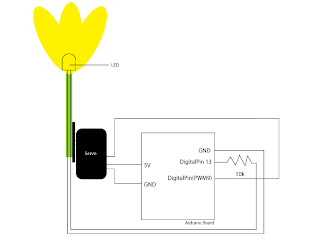 The flower is made of a floppy plastic tube covered in green tape. The tube has a certain sag to it - giving a natural feel. To "wilt" the flower, we rotate a disk the tube is attached to inside the pot, making the tube lean forward. The tube sags in that direction, making the feeling more natural.

In practice, the motor and LED light wires look like this: 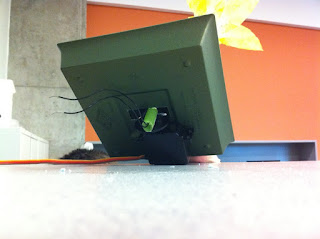